What Does A Dog’s Tilted Head Mean? 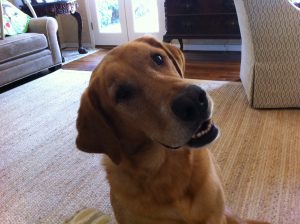 Like us dogs communicate with body language. They use their faces, tails, and ears. In an article about Justin Silver’s latest book “The Language of Dogs” he decodes several signals on what your dog is saying. When you understand a dog’s posture and signals it will help you in predicting a dog’s next move. A cute tilted head may mean your dog heard a sound he likes or key words that excite him. I know a Cavalier King Charles Spaniel named Gentry who when you talk to him his head is constantly tilting as if he is listening to you. He is listening for his favorite words to be said as do you want to go—he is ready!

Looking away when you look–“That’s a polite dog going out of his way to let you know that he comes in peace”.

Exposing the whites of the eyes–“When you’re mainly seeing the whites of a dog’s eyes, aggression may soon follow. That tense stare that comes out of the corner of the eyes is often associated when dogs are hyper protective of toys, territory, or food.”