Kato and His Kitty Friend

I recently moved into an apartment complex in Dallas. And like most apartments in major metropolitan areas we have some feral cats. Sometimes it is just part of life! Most of these cats run off when they see a human, a few might linger and see what you are doing, but there is one that likes to follow Kato and I around! 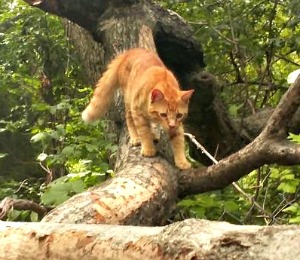 Kitty is a cute, friendly orange tabby. He likes climbing trees and sitting in the grass. He also really likes Kato. Kato thinks cats are ok. He has had a few cat housemates, so he knows the routine with the felines. Kato is usually too focused on finding squirrels to care about Kitty. Kitty wants to be best friends. However…. since Kitty is a stray, unneutered and unvaccinated cat, I don’t let him get close. Even though Kato is up to date on all his shots I definitely don’t want to explain to my vet that Kato got scratched because I let him play with a stray cat! Kitty’s fascination with Kato poses another problem though…

Kato is a funny little dog. He won’t poop if there is another animal near. It makes sense with small mammals because he wants to chase them. But around strange dogs he won’t, and around cats he won’t. Which makes our new fan club a bit of a problem. There are a few “prime” potty locations in the complex and it always seems like that is where Kitty likes to appear. So if Kitty decides to follow us all the way around then we have an unsuccessful trip outside. Then we either make another round, or wait until Kato has to go and can hold it no longer!

To Kato’s Fan Club: I’m glad you like my dog… but can you follow us AFTER he has pooped.