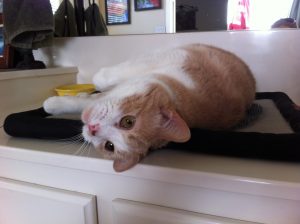 Flurbiprofen is used to relieve the symptoms of arthritis and muscle pain. It is one of the many non-steroidal anti-inflammatory drugs (NSAID) found in pain medications.

A small amount of the drug can be fatal to our feline friends!

As we discussed earlier in 5 Tips for Keeping Your Pet Safe From Topical Products it was the topical product applied to the humans and then contact with their cats proved to be deadly. The cat owners were not careless and did not leave the medicine out for the cats to get into, nor did they apply directly to the cats. It was the contact the cat had with them after they applied the product.

Per the FDA ” The FDA has received reports of cats in two households that became ill or died after their owners used topical medications containing flurbiprofen on themselves to treat muscle, joint, or other pain. The pet owners had applied the cream or lotion to their own neck or feet, and not directly to the pet, and it is not known exactly how the cats became exposed to the medication. The products contained the NSAID flurbiprofen and the muscle relaxer cyclobenzaprine, as well as other varying active ingredients, including baclofen, gabapentin, lidocaine, or prilocaine.

Two cats in one household developed kidney failure and recovered with veterinary care. Two cats in a second household developed signs that included reluctance to eat, lethargy, vomiting, melena (black, tarry, bloody stools), anemia, and dilute urine. These two cats died despite veterinary care. A third cat in the second household also died after the owner had stopped using the medication. Veterinarians performed necropsies on the three cats that died and found evidence in the kidneys and intestines that were consistent with NSAID toxicity.”

Pet owners should use extreme caution when using flurbiprofen or any topical products around animals!

Here are some recommendations by the FDA: