Dog’s Communicate in Many Ways 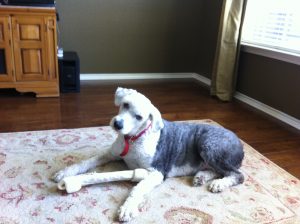 I love my bones!

In 2010 a group of researchers in Budapest did an excellent study on how dogs respond to specific recorded growls. The researchers recorded a series of play growls, threatening growls and the growls dogs emit when they are guarding food.

They placed a meaty bone in the middle of the room and then allowed one dog at a time into the room with the meaty bone and had a recorder set to play the three different types of growls.

Can you believe the play or threatening growls didn’t deter most of the dogs from partaking in the meaty bone? However 11 of the 12 dogs backed away from the bone immediately upon hearing the food guarding growl. Only 7 of the 12 returned to the bone within 90 seconds.

This study suggest food guarding is the most universally understood communication among dogs.

My own dog Chrissie who I got when she was around 2 years old suffers from not knowing appropriate canine communication. When trying to play with another dog she growls and barks and makes sounds as if she wants to fight. This puts the other dog on the defensive and they could come back in a fighting mode.

Hopefully this information will help you better understand your canine friend.