As any cat owner will tell you, cats love to be petted. To lie in a human lap and be gently stroked to the accompaniment of appreciative loud purring is sheer heaven for the average cat, and most humans enjoy it too. However, it seems that the human touch and general human interaction is liked by cats much more deeply than had previously been thought.

According to a recent study, a majority of cats will prefer human touch to food, if given a choice. Of course, this assumes that the cat is not actually starving and not even especially hungry, for as most cat owners know, cats will eat at almost any time if offered something tasty. So, if a cat will actually prefer the touch and interaction of a human to a tasty morsel of food under normal circumstances, that surely says a lot about our general relationship with cats. 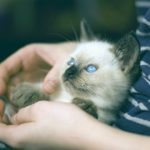 Three researchers with Oregon State University and Monmouth University, Kristyn Vitale Shreve, Lindsay Mehrkam and Monique Udell, spent some time with cats. Their experiments involved 50 cats, a mixture taken from people’s homes and from cat shelters. They were all left without human contact, food or cat toys for several hours, and were then given different stimuli associated with these three things in turn. A majority of the cats showed a preference for human contact over food or toys, and the researchers found little difference between the preferences of home-based cats and shelter cats.

Of course, cats are not immune to the temptation of food, and some 37% of the cats tested spurned the attraction of human contact in favor of the food offered. A much smaller 13% showed a preference for playing with toys, which left 50%, or the majority group of the cats tested preferring human attention. This largest group who preferred human contact also spent some 65% of their time interacting with their human friends. This was a longer time than the other two groups spent individually on food and toy play.

Cats have traditionally been thought to be rather aloof when it comes to human contact. Some have even asserted that our feline friends only show affection to maintain the free food on offer. That is a rather cynical view, and the results of this study appear to have borne it out. Cats really do like us humans. They may not always demonstrate this in a way we can readily appreciate, but their fondness of humans is there, nevertheless.

Dogs tend to bound around a lot and wag their tails in obvious delight. They always seem to be willing to please, whether it’s fetching a stick or holding out a paw to be grasped and shaken. All this makes us think that dogs love us humans much more than cats do, but don’t be fooled; cats are simply more subtle in their approach, but every bit as loving in their own way.

If you enjoyed this article, you might find the following interesting as well… Tips on Grooming a Cat, Celebrate Black Cat Appreciation Day.