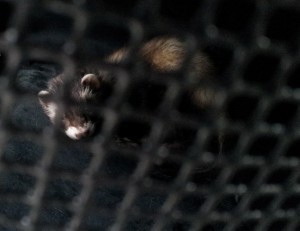 One of my favorite things about being a pet sitter is that you never know what you are going to walk in to! There is a level of consistency to all visits, but every day is different. This is a story of one day that was very different.

I have a client that I do overnight visits for regularly. This day it had been raining all day long and I knew that the dogs were going to be muddy. They have a dog door with access to indoors, but they really like mud puddles. When I came into the house I found that I was right, muddy dogs. So I went about the house gather up what I needed to clean up the dogs and their room. I was separating clean dogs and wet dogs in their crates when I noticed something hop into the dog door and head into the laundry room.

I didn’t think much of it at that instant. There is a cat that lives in the house too, and the cat supplies are in the laundry room. Maybe the cat was just wet and walking low to the ground because of the rain. As I turned to walk down the hall to get the next dog to clean, I stopped. That wasn’t the cat. The cat isn’t that long, or skinny. And I know the cat has bigger legs than that. I peaked into the laundry room and sticking out of the cat’s litter box was…. a ferret nose.

A ferret had decided that this house was a good choice to seek shelter from the rain. I ended up following it around the house before shuffling it into a dog carrier and putting it in a side room. It was good for the ferret that I had the dogs in their crates. He would’ve been a quick snack! The dogs sniffed all over me, and the outdoor furniture for the ferret scent. I have a feeling that the skinny thing was hiding on the patio before making his way inside.

I called the owner, but they hadn’t suddenly decided to adopt a ferret. And with it being dark, rainy, and cold canvasing the neighborhood wasn’t an option. I left a message with animal control but it was after operating hours. The ferret was going to stay the night. I gave the visitor some cat kibble and water. It seemed content enough, but I ended up being more worried that it would escape from the carrier and become a dog toy. Everyone was kept separate from each other. The dogs weren’t so happy about that. They spent most of the night with noses under the door trying to sniff out the unexpected visitor.

I was under the impression that ferrets sleep most of the time. Not this ferret! He was up all night trying to figure out how to work a zipper! Morning couldn’t come fast enough. Don’t get me wrong, ferrets are neat creatures! But I wasn’t prepared for a ferret. I was hoping that I would wake up and it would be just a bizarre dream. The ferret was still there in when I woke up.

To my relief the animal shelter was open on Sundays. I dropped the ferret off as soon as they were open. I was surprised to learn that it was microchipped! Hopefully the owner kept their information updated. I know that the shelter made sure that the ferret got home or to a good rescue. A few days after I turned the ferret over I realized that I missed it. That is my fault because I took to calling it “Chaos”. We all know that if you name something you form an attachment to it!

So to you, Chaos ferret, I hope that you are in a warm bed now! Thanks for reminding me why I love my job!